What’s In My Carry-On Bag

As I write this post I’m currently sitting in the departure lounge of Heathrow Terminal 4 (it’s not a patch on Terminal 5, which is literally the crème de la crème of gigantic waiting rooms) about to board a three-part flight to Koh Samui, which I’m sure by the time this post goes live you’ll be absolutely sick of me going on about on Instagram and Snapchat. Don’t worry I’m back tomorrow and then the vlog fun will begin. YAY.

I pictured this post to be the little sister of today’s video in which I share my top 10 travel essentials; from the comfiest leggings in the world, to my headphone secret for nervy flyers. Scroll down to the bottom of this post if you’d like to watch that, but initially I thought I’d talk through my edited hand luggage selection that over the years I’ve managed to honed down. Instead to Koh Samui I’m taking the biggest cabin bag I can, full of clothes, underwear, toiletries and electricals because I’m pretty much 100% sure that my luggage isn’t going to make it to the end at the same time as I am. I’d be alright for a good couple of days with the contents of this thing. However, most of the time I’m not flying that far, nor in so many different legs and so I like to keep it simple. Here’s what I’d recommend hauling in-flight… Entertainment. There is nothing quite as mind-numbing as having to sit still for hours on end with not that much to do. Along with an iPad full of Parks & Rec episodes, I like to make sure that I have some audiobooks downloaded, have some magazines with me and some games on my phone that I’m semi-good at so I keep going with them, but not so good that they’re boring (Flo Free is simply awesome for this).

Electricals. I travel with a lot more electrical goods than I actually need because I like to keep any valuables on me in my carry-on case. That means that my laptop is always in there (although I don’t often use it unless I’m editing) along with the charger and my phone charger – just incase. I mention this in today’s video, but the BOSE Noise Cancelling Headphones are seriously game-changing if you’re a slightly nervous flyer as they block out the engine noise, the sound of crying babies and just generally make you forget that you’re even on a plane. I daren’t fly without them, even for the shortest of flights. There’s nothing like a bit of Ed Sheeran in your ears during take off. Although a lot of flights and airports have electrical points these days, I still love my Apple Battery Charger Case, that although looks a little bulky, contains an extra 100% battery charge and so lasts twice the time. Even with all the Snapchat browsing I do, I can still get over 24 hours out of it. Essentials. The boring bits. Along with any travel and insurance documents, money, your passport and any visa info, I highly recommend writing down or printing out the details of where you’ll staying at the other end. I always assume that my phone will work, but if even if that fails the chances are your phone will be running low on battery after a flight. Writing something down does feel like a bizarre task now for us millennials, but when it comes to travel, sometimes tech ain’t your best mate. You also need a bag to throw everything in – I love the Whistles Verity Backpack because it’s so easy to carry and I usually end up using it during my holiday too.

Toiletries. I used to travel with so many toiletries that I could open a small pharmacy from my seat on the plane. However there are just a handful that I actually use during a flight. Hand sanitiser is handy to have as is a toothbrush and toothpaste, because anything to help you keep fresh when you feel pretty grim gets a thumbs up from me. I used to love the This Works Deep Sleep, Stress Less Rollerball, but this has now been replaced by the Stress Check, Breathe in which is equally nice and calming. Great for if you find yourself sat next to the loos and need a breath of fresh air. A multi-tasking oil or balm, like the Votary Maroc & Sandalwood Facial Oil not only gives moisture to your face and body, but can also double up as a cleanser if your bags are delayed. I tend to apply a thick layer and let it sink in over the course of the flight. Then always remember a lip balm – something like the Caudalie Lip Conditioner – that you don’t have to dig your finger in. Mark loves it so much he badgers me about 10 times a day to use it. 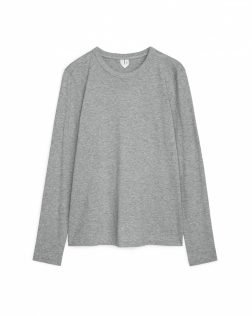 Always good to make sure you have the basics nailed in my wardrobe. 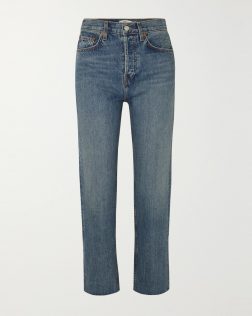 My FAVOURITE denim – no contest. I’ve had these for years.

Just the best belt in the business. You’ll never need another one. 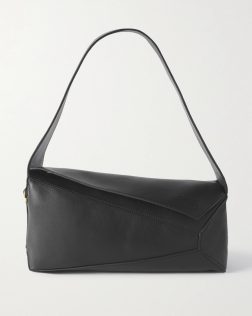 If you’re looking for a classic designer shoulder bag – this is it.

Wear this with a jumper, to make it a casual everyday piece.

Again, a Mejuri piece that I don’t take off. It goes with everything.

A knitted skirt is such a great transitional piece to have in your belt. 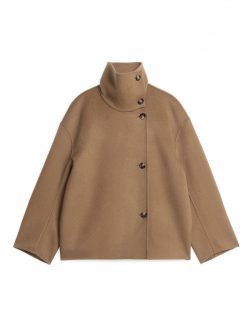 The most Toteme-looking jacket I’ve seen (from ARKET lol!).